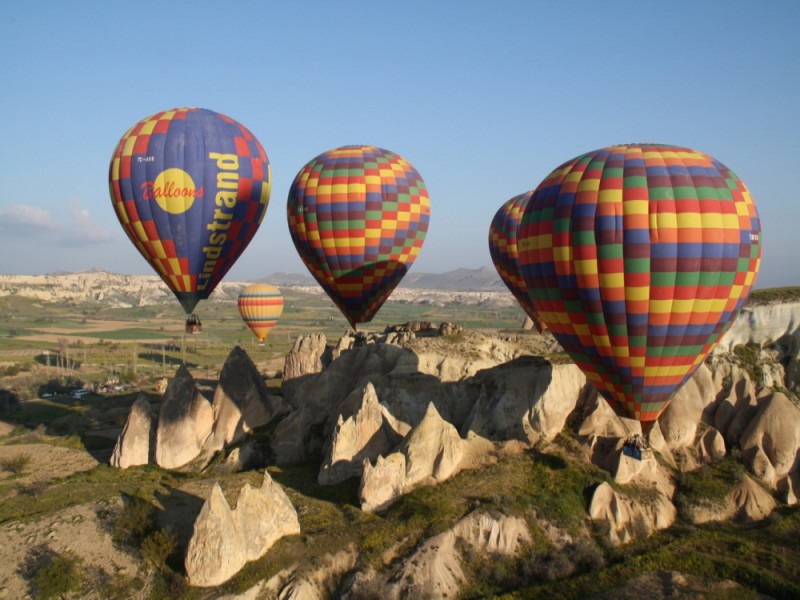 The bases of the name Cappadocia (Kapadokya) is believed to date back to 522-486 B.C. the period ruled by Persian King Darius I. During this time the Persians ruled what is now Central Anatolia, the first known inscription of the area has been found in ruins from this period writing as Katpatuka, many sources suggest the name to mean Landof the Beautiful Horses.
Cappadocia is one of the world’s most surrealistic geological wonders. The area is a result of millions of years of natural forces and volcanic activity. Between 65 and 2 million years ago two continents gradually approached each other from the north and south, clashing in the area known as Anatolia. In this area three major cones were formed, those of Mount Erciyes, Mount Hassan and Melendiz. These volcanoes are believed to have erupted over years throwing lava out over the Cappadocia region. Recent studies have also suggested even older, non-visible volcanoes may be the original makers of today’s Cappadocian landscape. Either way these volcanoes formed a thick layer of tufa  rock, both soft and hard, basalt, ash, clay and sandstone. As time moved on and with natural activities from the rivers, wind and rain the tufa began to erode forming various formations all around what is now known as Cappadocia.
Modern day Cappadocia is made up of 5 provinces, Niğde, Kırşehir, Aksaray, Kayseri and the Cappadocian capital Nevşehir. Previously this region extended closer to Ankara and the Taurus Mountains. The Cappadocian region is a place where nature and history come together in perfect harmony. While geographical events formed the famous Fairy  Chimneys and other unusual rock formations, humans throughout the ages are responsible for carving houses and churches displaying images to continue the story telling of  thousand year old civilizations.

Places to visit in Cappadocia

Avanos: Sitting on the edge of the Kızılırmak (Red River) Avanos is famous for being the centre of Hittite Pottery. Take the opportunity to try your own hand at making your piece of art with red clay.

Devrent Valley and Paşabağ: This is where you will see the most fascinating rock formations from mushrooms to camels.

Göreme: Hidden amongst the Fairy Chimneys truly is the heart of Cappadocia. This quaint little village is now well set up for the tourist and in right in the centre of the Cappadocia region making it the best starting point for each day of your stay.

Göreme Open Air Museum: Housing some of the most famous rock-cut churches in Cappadocia and the most well preserved frescos from the 8th to 13th centuries, the Göreme Open Air Museum gives insight into the period where Christians were fleeing oppression and made Göreme one of the largest Christian centres in Anatolia.

Gülşehir: Home to the Church of St. Jean with its marvellous frescoes and Açıksaray, the deserted cave village with its numerous complexes and complex facades.

Kaymaklı or Derinkuyu Underground City: Whether you visit the largest or the deepest or even one of the smaller lesser known underground cities such as Özkonak, this adventure is one not to miss. The engineering behind the underground cities made to hide entire communities will shock you.

Mustafapaşa: Previously known as Sinasos, this old Greek village is famous for its differing architecture, unmistakably in Hellenistic style.

Soğanlı Valley: Lesser known than the rival Ihlara Valley, Soğanlı is a suprising change for those looking for something a little less quiet. The valley is lined with unusual rock formations different to those of the rest of Cappadocia and littered with churches. Some of the most famous being the Domed roof Church, Snake Church and Hidden Church. Further walking tracks are currently being routed and a new underground city in being excavated.