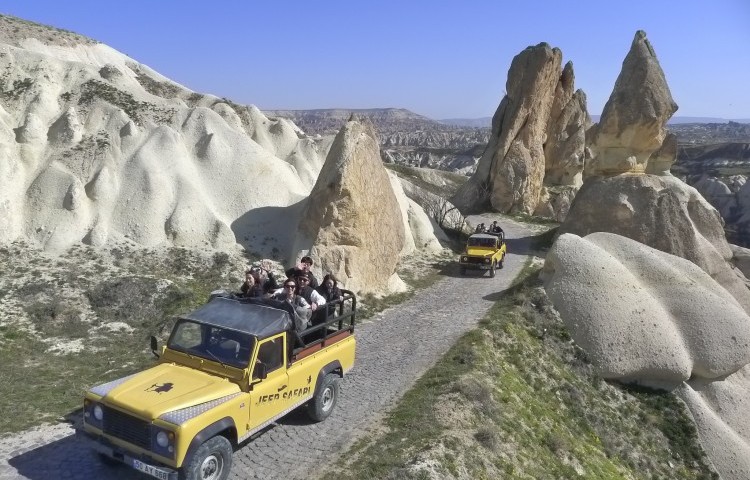 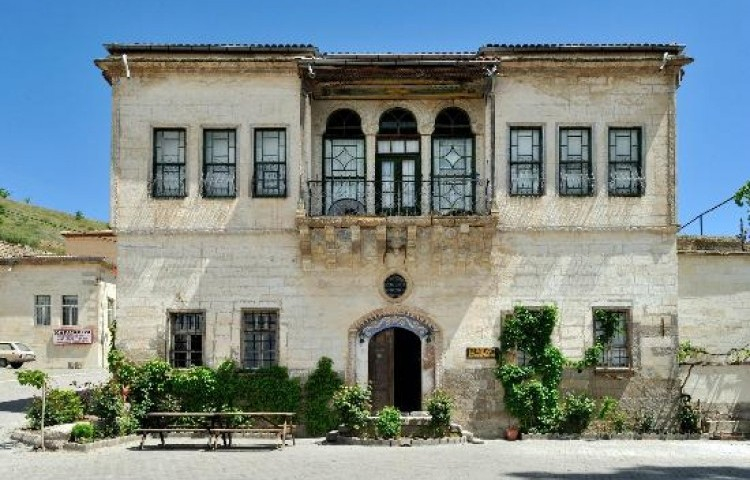 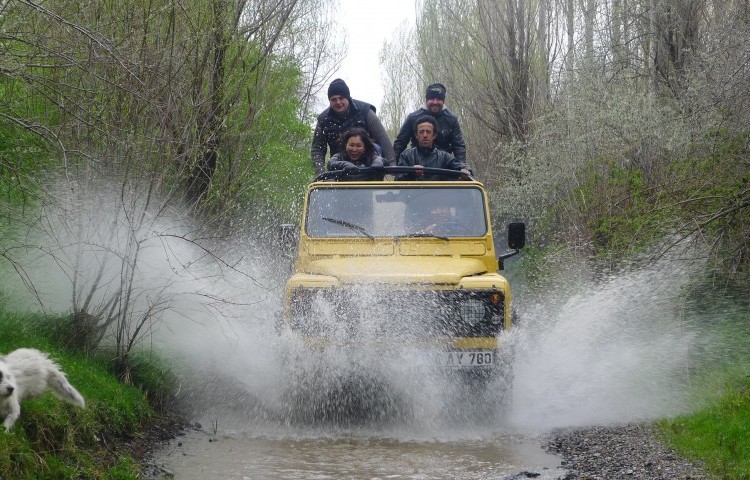 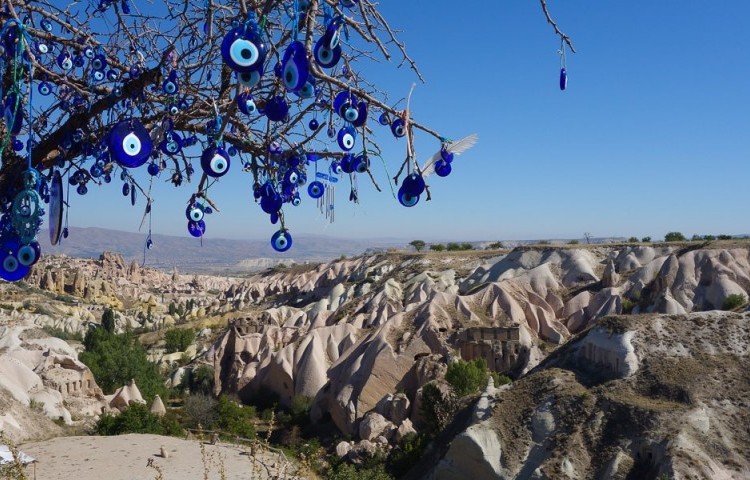 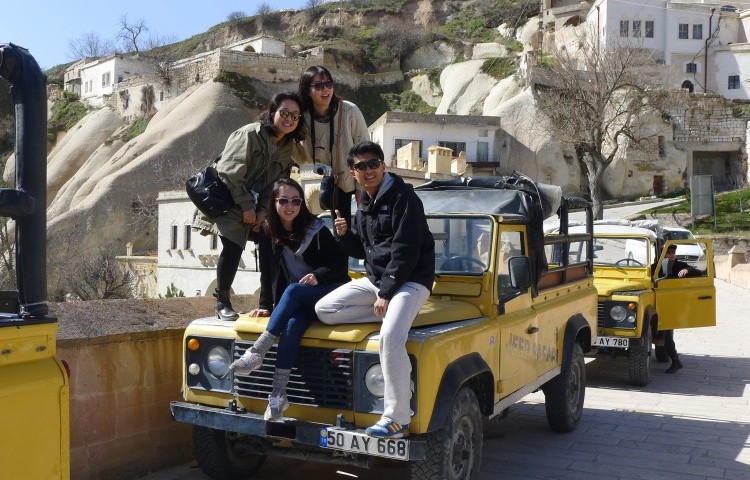 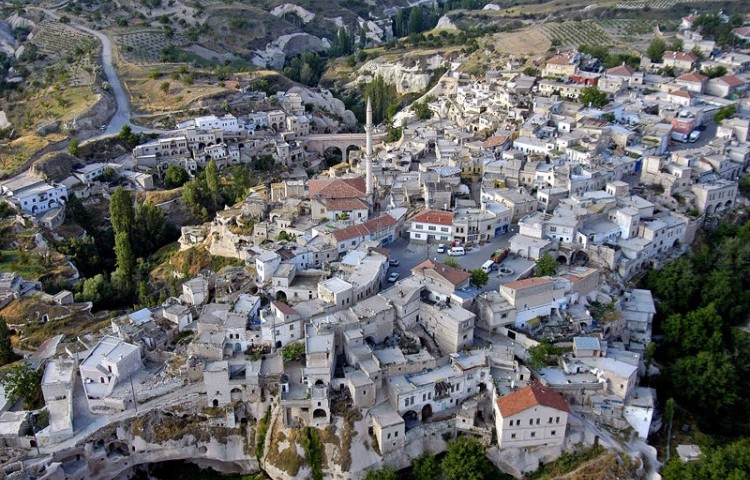 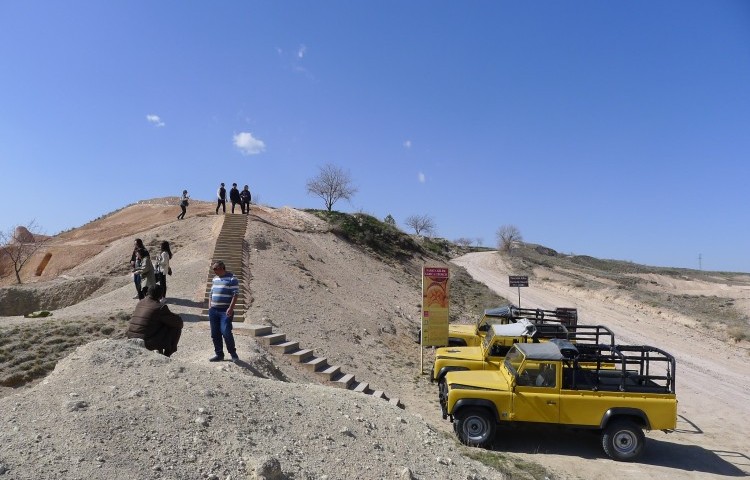 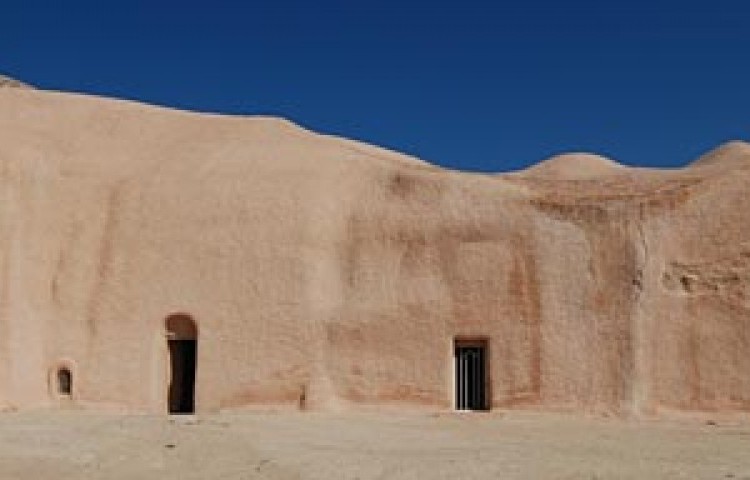 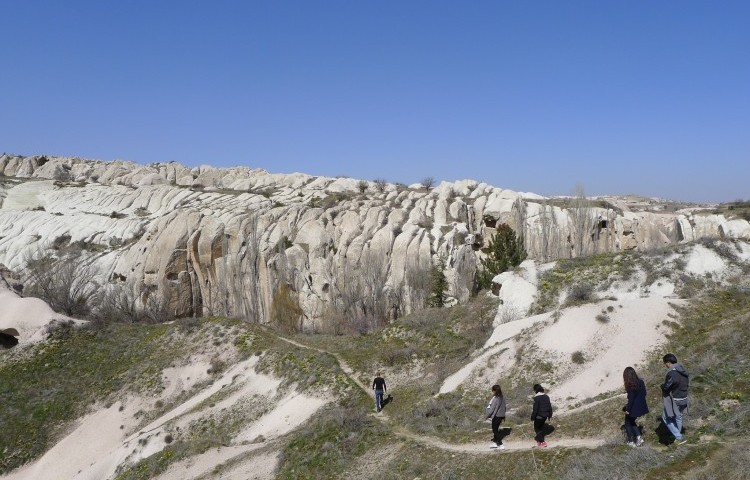 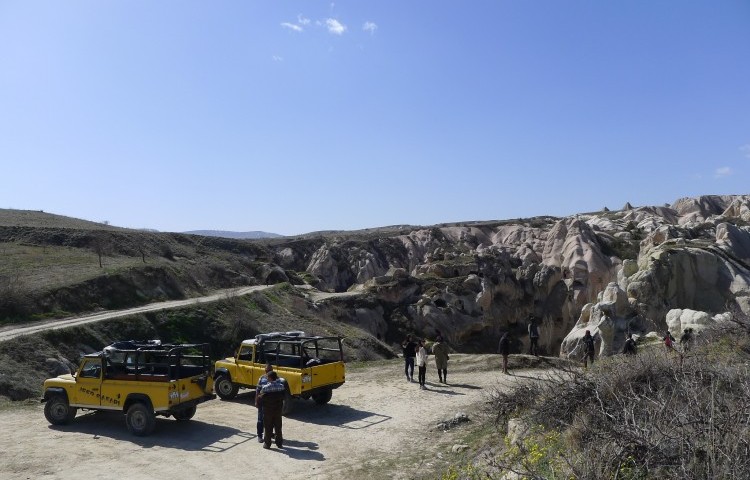 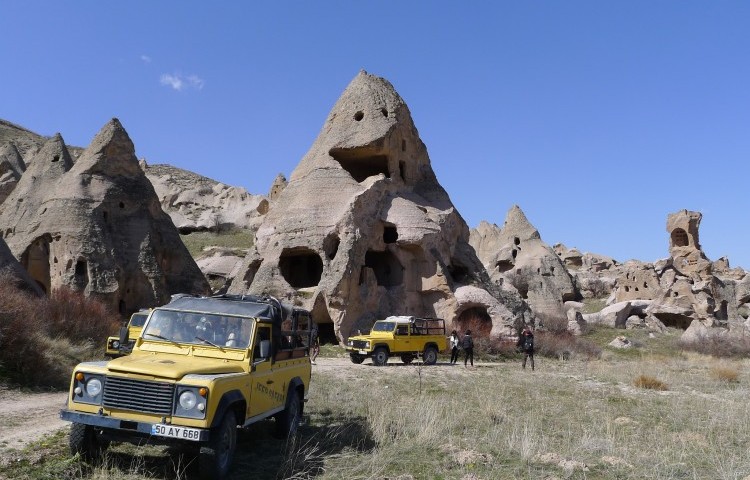 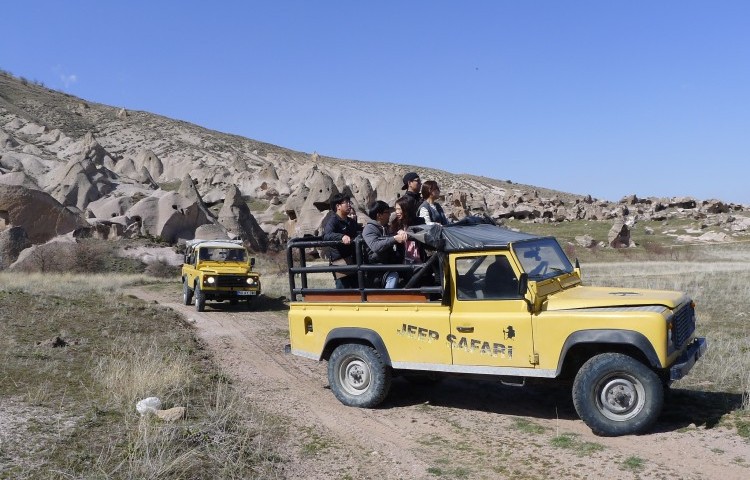 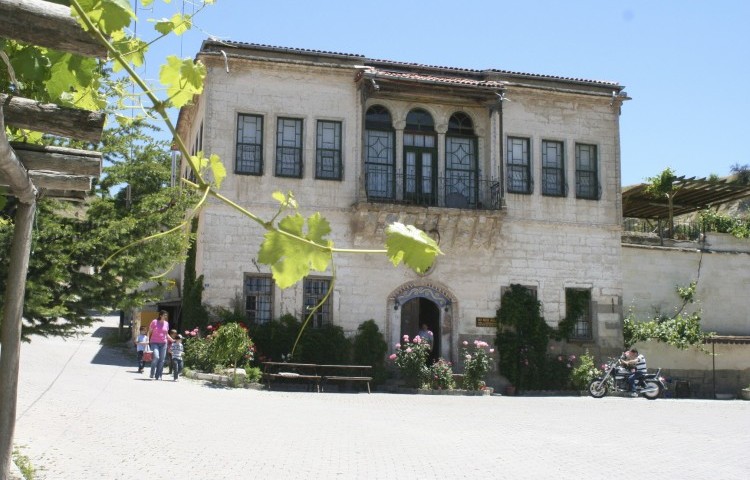 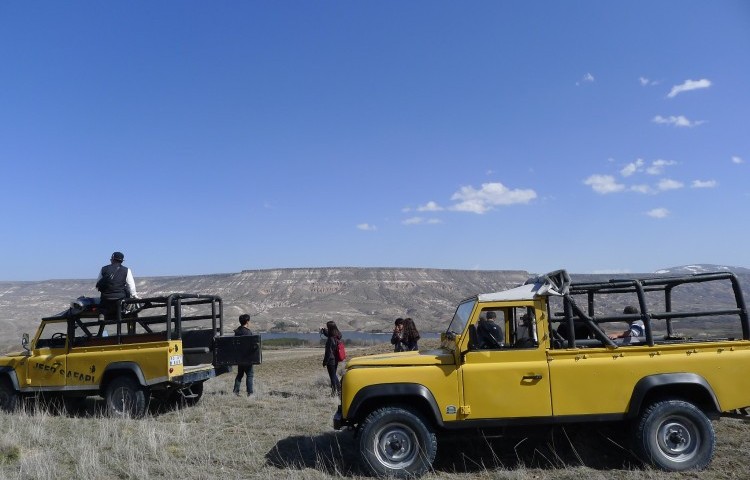 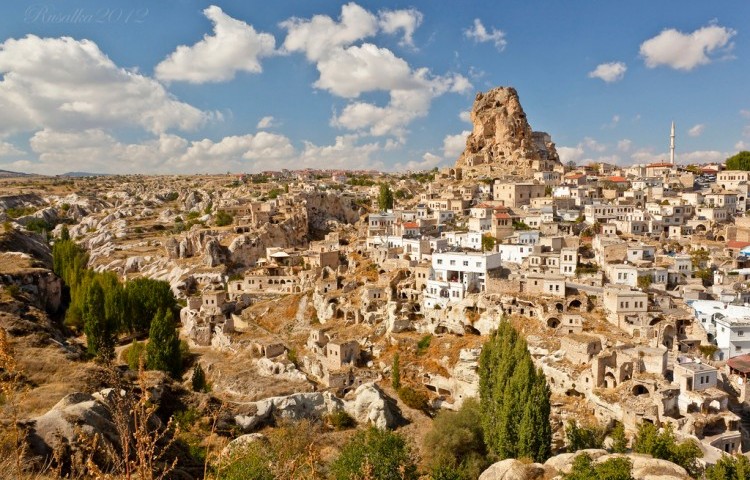 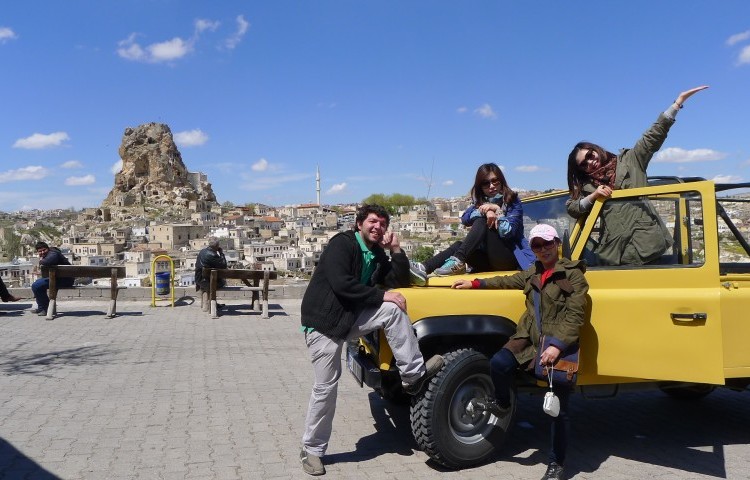 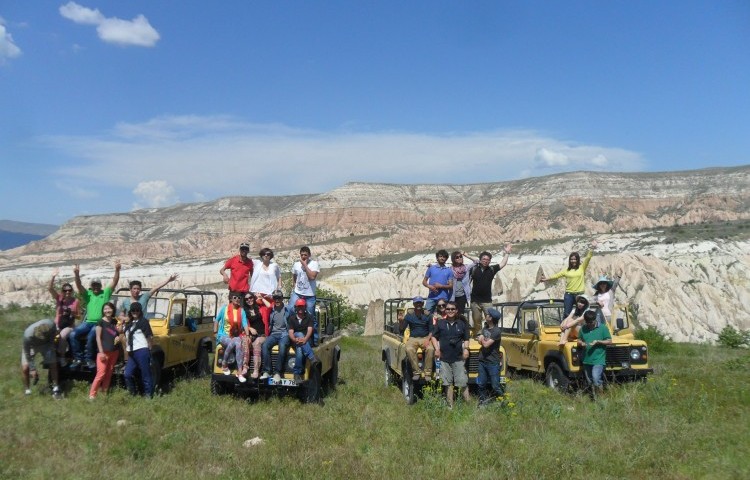 One of the most interesting and adventurous activities in Cappadocia is undoubtedly Jeep Safari Excursions with an off-road vehicle.
JEEP Safari: Start 10:30 am - around 03:00pm
( 40 euro )
One of the most exciting adventures in Cappadocia is exploring the region in an off-road vehicle. :
Pegion Valley
Ibrahim Pasha (old village)
Ortahisar valley (case view)
pancarlik valley
gomeda valley (old church)
damsa dam panorama view
Mustafa Paşa (old greek town)
*price including lunch

* Pigeon Valley
Uchisar is situated at the highest point in Cappadocia, on the Nevsehir-Goreme road, just 5 km from Goreme.
There are also many other pigeon houses in Pigeon Valley (Guvercinlik Vadisi in Turkish) which connects Uchisar to Goreme. Most of these cave dwellings have been painted white to attract the birds and their valuable droppings.
The fairy chimneys to the west, east and north of Uçhisar were hollowed out and used as graves during the Roman period. Inside these rock cut tombs, the entrances which generally face west, are klines or stone slabs on which the bodies were laid.


*İbrahim   Paşa
The Cappadocian village of İbrahimpaşa lies just two km off the main road linking Ürgüp to Nevşehir, but even though it's close to the junctions with much-visited Göreme and Ortahisar it's only just waking up to its touristic potential. This translates into a lot of building work going on, especially near the bridge in the centre. Regardless, this is still a sleepy little place where you are more or less guaranteed a quiet stay.      Babayan is its old name, now it is called as İbrahimpaşa. It hasn't strange rock formations but it has beatiful stone houses.


*Pancarlik  Valley  (Sarica   Church)
Sarica Church is within a first degree natural conservation area and very close to the area in Cappadocia which was designated a World Heritage Site in 1985, namely the "Göreme National Park and the Rock Sites of Cappadocia". Located within a geography known for the monastic life of the early Christian period in Anatolia (Asia Minor), Sarica Church is an example of troglodyte heritage, carving the naturally soft tuff stone that characterizes the region of Cappadocia to create living spaces.


* Gomeda  Valley
Gomeda Valley is 26 km (16 mile) far to Nevsehir centurum. The valley also mentioned Küçük Ihlara because of the similarity with Ihlara valley and situated in Ürgüp – Mustafapaşa road begins from Mustafapaşa which is a 5 km far away from Ürgüp.
On the beginning of the valley, we can see Gomeda Ruins. Since it has a small number of  fairy chimneys, in comparison with the other valleys which are in Cappadocia it has a small number of visitors too but with its great natural beauties it is a mysterious valley in terms of it has full of tunnels which has no end, not known where  its’ exit is and dark caves.
This valley is known to be the most greenery valley of Cappadocia.


*Golgoli  Valley  ( Monastery )
Golgoli Valley is 26 km (16 mile) far to Nevsehir centurum. Golgoli Ancient City which has a church ruin on Golgoli Hill, is an old settlement which is 5 km south to Mustafapaşa. Golgoli Vadisi which has an impressive appearance with  wheat and zucchini fields surrounding is and unique valley thanks to its deep underground caves which hide itself, holy springs of orthodox Greeks which can be descended a ladder inside, wheel races and wells. Besides, on its 1 km far away from south there is a 4 arched stone bridge built formerly by Rum in order to carry water to town. There is a church known as “Kır Kilise”  on the top of the Panayia Mountain where this bridge is found there. This church used by goers to foothills of a mountain in order to celebrate the birth of Mother Mary on October 8th was named after the mountain where it situated.


* Mustafa Pasa  (Old  Greek Village)
Mutafapaşa Village, a former Greek town which was inhabited by "Rums" (Greeks) until 1924 population exchange. Called Sinasos ( SEE-nah-sohs) by its Ottoman Greek residents, it is still called that today by many local people.
The Cappadocian tourist towns of Ürgüp and Göreme are better known, but Mustafapaşa is just as interesting, less well known, and therefore a better choice for those seeking authenticity.


*Ortahisar  Panorama
Ortahisar is famous for its friendly inhabitants, picturesque stone houses, narrow streets and lovely churches as well as the castle-like rock formation after which the town is named. This 90m high natural fortress, a promient landmark in the region - honeycombed with caves and tunnels, camouflaged by nature without the slightest indication of human presence inside - has partly crumbled away revealing some of its interior. Today it has been restored and the peak is accessible by a staircase. the ortahisar castle offers a magnificent panorama over the fairy chimneys of hallacdere and the snowy peak of Mt. Erciyes.


*Damsa Dam
It is constructed on the Damsa River, the dam is 17 km from Urgup and used mainly for irrigation. It is now an attractive area for walks and picnics, on the shore of the Damsa Lake, surrounded by pine forests and offering good shade in the summer. It is a convenient place to stop en route to Mustafapasa, Taskinpasa and Soganli.