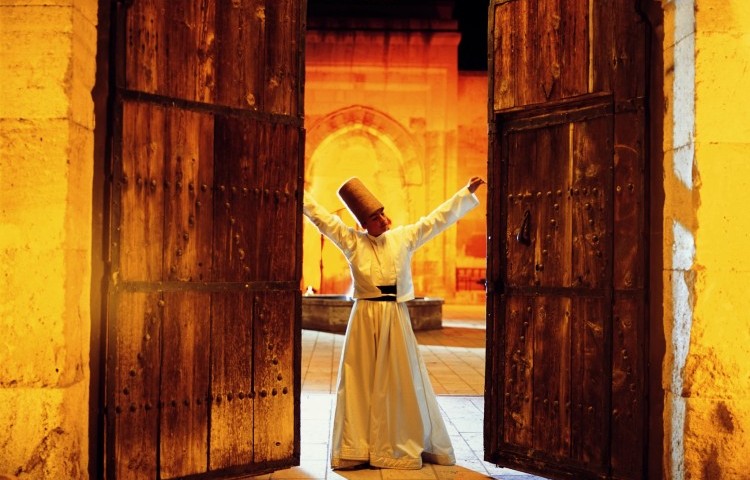 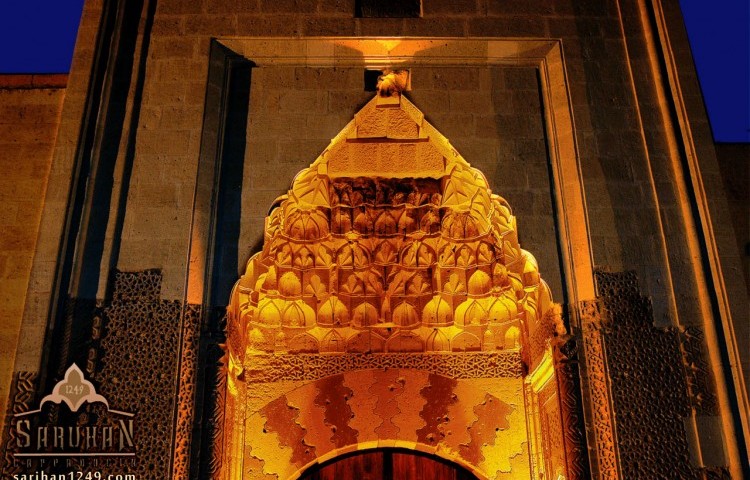 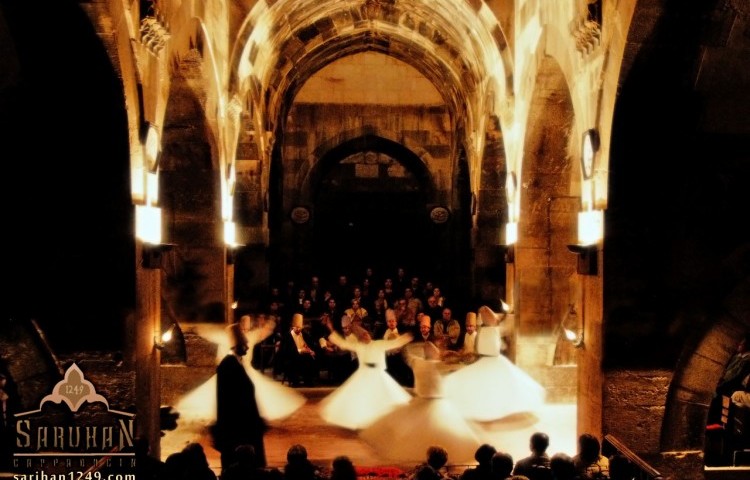 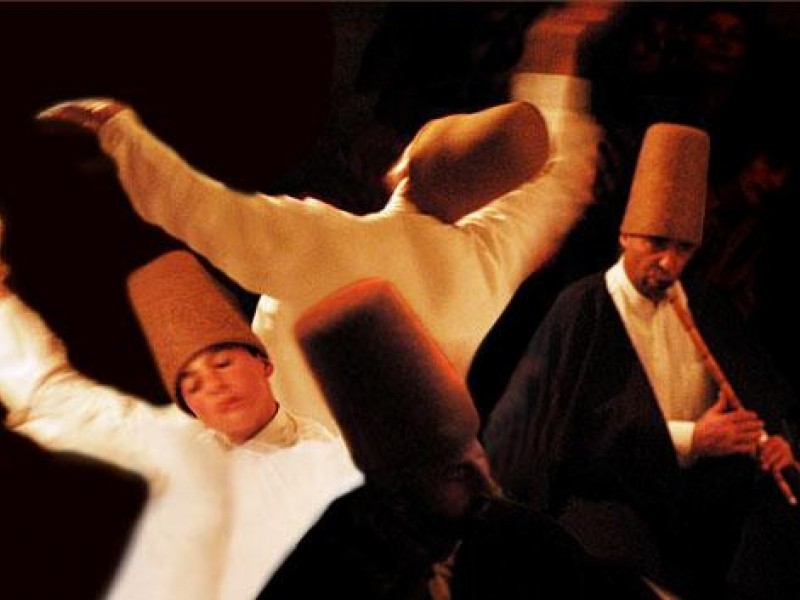 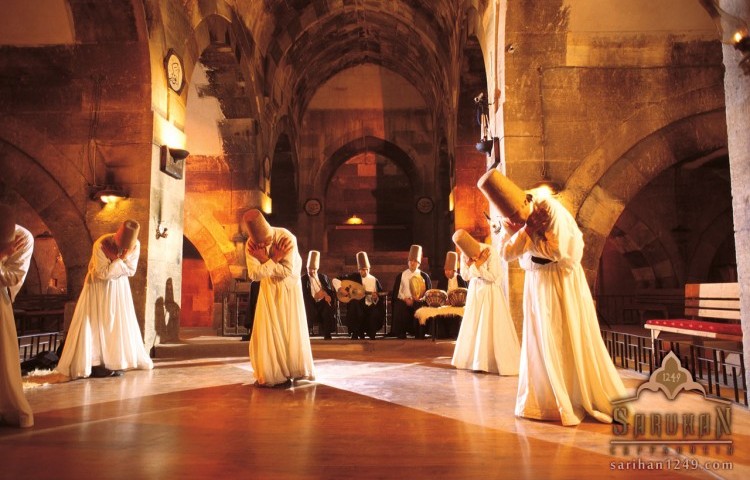 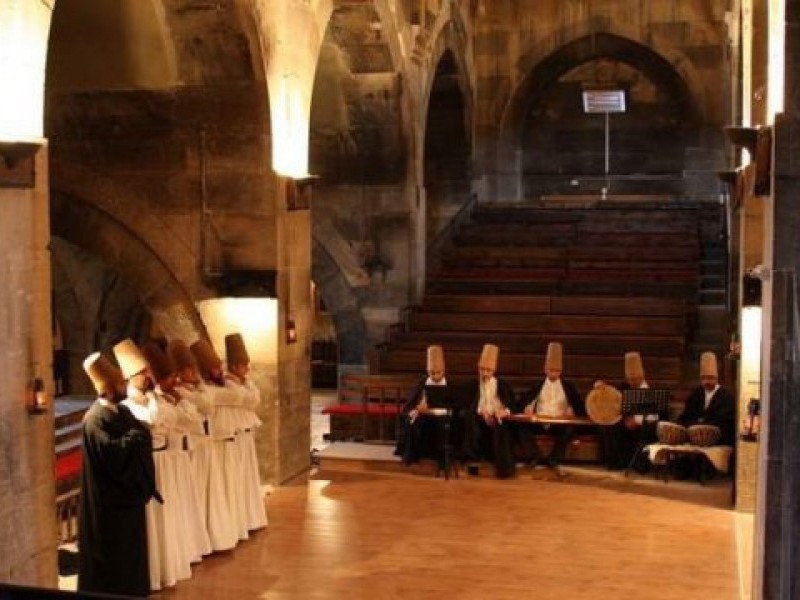 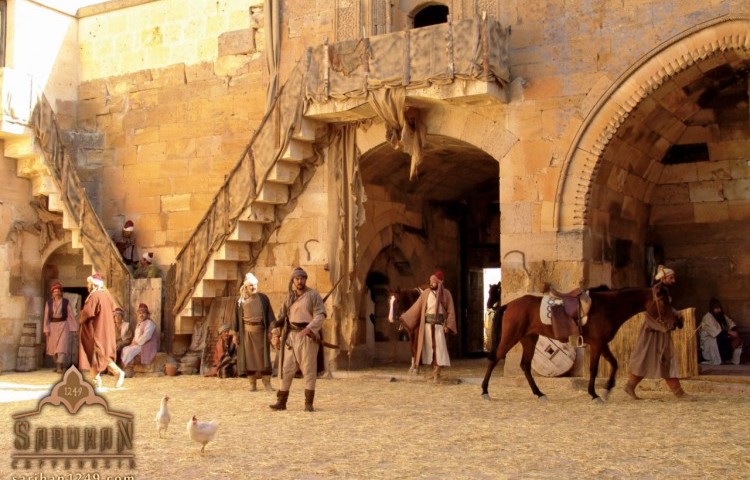 Previous Next
Whirling Dervishes ceremonies start at 18:00 in winter and 21:00 every night. The whole ceremony takes around one hour. Turkish Heritage Travel picks you up from your hotel in Goreme or other towns of Cappadocia half an hour earlier, which will give you enough time to see the parts of the caravanserai prior to ceremony.

The rate of the ceremony is 35 Euro per person including transfer. We offer free pick-up/drop-off service for all the hotels. It is forbidden to take pictures during the ceremony. Email us to book the famous Whirling Dervish ceremony.

Sema is is the inspiration of Mevlânâ Celâleddin-i Rumî (1207 - 1273) as well as part of Turkish custom, history, beliefs and culture It symbolizes in seven parts the different meanings of a mystic cycle to perfection (Ascension - Mirac). Contemporary science definitely confirms that the fundamental condition of our existence is to revolve. There is no object, no being which does not revolve and the shared similarity among beings is the revolution of the electrons and protons in the atoms, which constitute the structure of the smallest particle to the stars far in the sky. As a consequence of this similarity, every thing revolves and man carries on his life, his very existence by means of the revolution in the atoms, structural elements in his body, bye the circulation of his blood, bye his coming from the Earth and return to it, by his revolving with the Earth itself.
However, all of these are natural, unconscious revolutions. But man is the processor of a mind and intelligence which distinguished him from and makes him superior to other beings
Thus the whirling dervish or Semâzen causes the mind to participate in the shared similarity and revolution of all other beings.
- The Semâ ceremony represents all a mystical journey of man's spiritual ascent through love, deserts his ego, finds the truth and arrives to the Perfect. Then he returns from this spiritual journeys as a man who reached maturity and a greater perfection, so as to love and to be of service to the whole creation, to all creatures without discriminating in regard to belief, class, or race The dervish with his head-dress(his ego's tombstone), his white skirt (his ego's shroud) is spiritually born to the truth, by removing his black cloak, he journeys and advances to spiritual maturity through the stages of the Semâ. At the onset and each stage of the Semâ holding his arms crosswise he represents number one, and testifies to God's unity. While whirling his arms are open, his right hand directed to the sky ready to receive God's beneficence, gazing his left hand turned toward the earth, he turns from right to left, pivoting around the heart. This is his way of conveying God's spiritual gift to the people upon whom God looks with a Divine watchfulness. Revolving around the heart, from right to left, he embraces all of humankind, all the creation with affection and love.

The Semâ is consisted of several parts, with different meanings